Post industrial revolution, businesses began taking a more pro-active approach to ‘culture’, often initiating ‘internal training programs’ aimed primarily at increasing efficiencies. Certainly, from an operational excellence perspective, ‘culture’ has proved to be one of the finest management tools. Of course, time – and ‘culture’ has moved on. In an era when trust in large corporations is at an all-time low, consumers and talent will choose the brands with maverick cultures more.1

The dilemmas related to corporate vs. maverick approaches are not new. Historically, the origins of the tension between the two dates way back. For example, the Catholic Church was a mainstream international institution with its banking and corporate culture, whereas the Knights Templar was an alternative global institution with its banking and maverick culture. Another example is based on how the unorthodox teachings contagiously spread among the influential and high-profile circles of Europe. The elites and top historical figures from science, arts and business (i.e., the Medicis, Dante, Newton, Robert Boyle, Goethe, Francis Bacon etc.) either belonged to, or were influenced by, the secret teachings of ‘secret societies’ with maverick cultures. In short: demand for unconventional thinking was never in short supply. Out-of-the-box approaches are associated with creativity, perspective, discoveries, and inventions. On the other hand, mainstream institutions and organization didn’t typically ‘allow’ for much of deviations from corporate doctrine.

Fast-forward to today’s world and we see that a maverick culture is still cutting-edge. For example, Dr. Harold Puthoff, the physicist who has worked closely for decades with the intelligence community (CIA, NASA, DIA etc.), has listed the areas of interest on where leading-edge tech trends are headed. Top scientists around the world were commissioned for their technical input. What’s interesting is that among such futuristic studies as ‘programmable matter’, ‘invisibility cloaking’ or ‘meta-materials’, in that list there was also - ‘corporate vs. maverick inventor cultures’.2

Maverick cultures tend to be more imaginative and inventive because multiple viewpoints are what makes these environment rich of thinking independently, of reframing the problem and of asking the right questions. A nice side-effect: many of the brands with maverick cultures are better at keeping it H2H (human to human). Corporate cultures tend to focus more on measuring the right things with the wrong measurement instruments and in consequence often find the right solutions to the wrong problems.

Maverick cultures get to the core of the matter much faster; in many ways, they are shrewder, whereas corporate cultures may waste too much time on process. It is often for good reasons that such environments tend to be more bureaucratic, associating corporate cultures with lack of speed and complacency. Maverick cultures, on the other hand, are associated with the advantages of reacting faster with better maneuverability.

A company’s culture cannot be copied easily – especially not a maverick culture. Over time, lasting differentiation hinges on a company’s ability to continuously innovate and perform. This is not only about a unique product or service, but also about building strength through a company’s unique configuration of people – or in other words, its culture. Brands with maverick cultures reach a level in which substitutability is reduced completely. Harley-Davidson, Patagonia, Tesla or luxury brands in general are good examples. 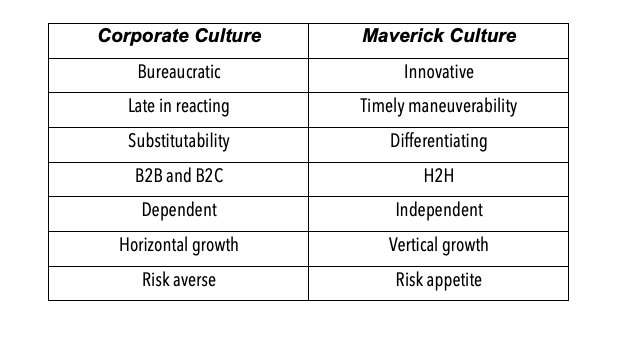 So, what is the major lesson that the brands with corporate cultures could learn from brands with maverick cultures?

It is vertical decision making or, in a word, ‘elevationism’ that leads to vertical growth. In Bain&Co’s analysis across 45 markets worldwide, the best companies – the economic leaders in their industries – are not always the biggest; and 40% of economic leaders are not scale leaders.3 In order to grasp this kind of leadership, it is better to look at brands with maverick cultures. It is, first of all, important to acknowledge that scale or size doesn’t necessarily make an organization the market leader. Such smaller brands, unlike their often much larger counterparts, run on different business models, concentrating on organised vertical growth: prioritizing focus to gain solid trust and aiming for immediate impact. Risk appetite and room for failure form part of these cultures.

Purpose lies at the essence of a brand and shapes vision, value systems, business architecture and ultimately a new kind of competitive edge in 21st century. Strategy becomes a function, rather than a direction.

For example, the UK Corporate Governance Code, published by the Financial Reporting Council, states that: “The board should establish the company’s Purpose, values and strategy, and satisfy itself that these and its culture are aligned.”

It is much harder to integrate Purpose thinking inside out into established corporations, since Purpose sits at the very core of an organization’s culture. Still, it is not entirely impossible. There is an increasing number of companies of considerable size that do run on Purpose: Apple, Google, Ernst&Young, HBR, to name a few. And the network is expanding.

For example, Google used to have a maverick culture in its early years, but had to move to a more structured, corporate approach due to its gigantic proportions. Nevertheless, the company is aware of the need of retaining maverick elements. The work environment, or the freedom within fences to spend the 20% of an employee’s time on something most beneficial for Google with no expectation for immediate dividends4 are exemplary.

The magic sauce lies in the balance

It is not about being either ‘only’ a maverick or ‘only’ corporate. It is more about finding the right blend of the two. Banks could often do well with a little less corporate but can’t be fully maverick; of course, retaining diligence and compliance processes remains at the core of building consistency and trust over time. Tech companies need a bit of both. Marketing departments, SMEs and boutique brands are almost always on the maverick edge.

The pandemic has pushed the agenda of maverick approaches into culture nearly everywhere. Just take Work-From-Home or hybrid models, less working hours and possibly shorter workweeks. More points of references allow to more broadly adopt and embed maverick aspects in the way we live. However way we turn it and on balance, a bit more maverick won’t do any harm. How maverick are you?

Show all
Related articles
thinking
Employer Branding: The Key to Winning the War for Talent.
thinking
The impact of individual actions on reputation
thinking
The Purpose E-Book by Markus Kramer
thinking
Rebranding for Rebound
1 2 3 … 12 Next »
Subscribe
to our Newsletter