“There is no such thing as public opinion.

There is only published opinion.”

Paid, earned or owned media? The secret lies in the right mélange of all three. It’s one thing when a company has the budget of Apple and heavily invests in publicity through paid, earned and owned media. It’s another thing when a company is a growing B2B firm or an SME that needs visibility for brand building and reputation strengthening. The former is much easier. Both require intelligent decision-making and tactical moves.

First things first, all precision comes from the accurate definition of terms. Paid media is any media coverage that can be bought such as advertorials, publi-reportages, paid social media promotions, commercials, campaigns etc. Earned media (or free media, not accounting for agency fees) refers to media coverage gained through tactical PR (Public Relations) moves. Owned media refers to releasing content on self-hosted platforms. This includes your own website, blog and social media platforms such as LinkedIn etc. This also includes industry analysis and reports, image movies, magazines, and any form of marketing material. The main differences between the three types of media coverage are in the degrees of control, relative cost, types of platforms/channels and effort of activation. The table below provides an overview. 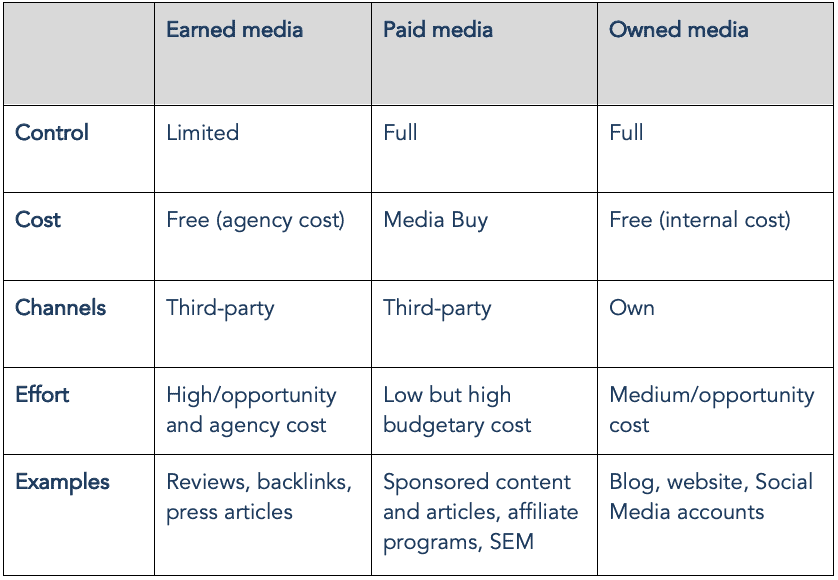 Start With Yourself (Owned Media)

Owned media refers to releasing content on self-hosted platforms and media. Owned platforms may not always have high credibility, but they are very valuable for online search engine optimization, for providing unbiased perspectives and to share and spread content efficiently. The ‘brand as a media outlet’ is nothing new and the practice of brand journalism, organizing communications similar to an integrated media outlet, is currently among the most effective ways to attract potential consumers. For example, consultancy firms such as Bain&Co., KnightFrank or Edelman produce economic analysis reports that circulate within the industry. At Brand Affairs, we publish the Responsible Investment Brand Index jointly with H-Ideas, for instance. Brands like Walt Disney or Lamborghini have their CEOs’ social media profiles actively and regularly communicating.

The secret code behind running successful owned media has to do with being a proto-source from which meaningful stories or knowledge come to light in an inside-out manner. In order to establish this territory in the minds of target audiences, brands are required to research and develop creative content inside-out, reveal latest thinking and developments, or operate as cultured enlighteners by passing on insider know-how to their audience.

What this direction gives to brands is that it adds value to the brand, raises awareness within key targete audiences, increases soft assets and solidifies thought-leadership and hence a brands own positioning. By putting meaning or purpose at the core, by providing substantial information over fleeting content, brands reach their audience to guide and not govern, seduce and not sell, attract and not attack. It connects with the audience of existing and potential customers in a more value-adding and non-commercial manner. A steady flow of quality content is a sine qua non.

Some of the better examples of owned media are: Christie’s ed-tech project, Harvard Business Review magazine by Harvard University, some of the online courses on Coursera, explanatory videos on global economic news by the World Economic Forum (WEF), the Oxford Dictionaries by University of Oxford and the renowned holistic media emporium of Red Bull called the Red Bull Media House. The energy drink’s media emporium produces games, apps, TV, musical podcasts, movies, sports events videos and magazines through creative collaborations and a global network of correspondents in some 160 countries.

In the case of our own work for example, we continuously invest time and effort in our owned media projects (such as Markus Kramer’s business book, an e-course, a Podcast, our Responsible Investment Brand Index etc.) while also continuously publishing content on our own website and social media profiles.

Paid media is any media coverage that can be bought: advertorials, paid social media promotions, commercials, campaigns and Search Engine Marketing (SEM) such as Google Ads etc. Paid campaigns can help increase the reach and therefore to spread the word about your business further, especially in those areas where earned coverage is still unlikely or hard to control. While the credibility of paid campaigns is not as high as it is for earned media coverage, it is still highly visible and it pays off in the long term. This applies to media coverage and social media visibility.

“Without publicity, no good is permanent;

under the auspices of publicity, no evil can continue.”

Based on our experience and from what we found in the analysis of many media houses we work with, we recommend focusing mainly on niche outlets in the first stage. Once a relatively frequent content stream has been generated with targeted niche media outlets, it becomes more likely that the mainstream media will start covering your brand as well. This, however, only makes sense if the campaigns are centrally aligned and have a long-term commitment. A “one-off” shot will not significantly improve visibility. The longer this approach is played out, (we are talking 2yars+ on the lower end), the more realistic it will be that the paid media campaigns can be decreased as the possibilities for more organic and earned coverage will emerge and increase.

There is no secret that this is the hardest one to achieve. Earned media (or free media coverage, not accounting for account and agency fees) refers to media coverage gained through tactical PR moves other than advertising (paid media) or your own channels (owned media). As mentioned before, applying the best practices for owned media and reasonably investing in paid media will eventually lead to and boost earned media coverage. The advantages of earned media coverage are even more important as search engine results (findability e.g., on Google) are of crucial importance to enhance the relevancy and perception of your firm.

“Publicity is absolutely critical.
A good PR story is infinitely more effective than a front-page ad.”

Achieving earned media coverage is much more desirable than either paid or owned media. Why? Because people trust friends and family for recommendations, online review sites, unpaid social media influencers for opinions and journalists for objective analyses. All of these are earned media and are influential in building your brand’s reputation.

In today’s world it is also possible to get earned media coverage through the experts in your team, influencers in your network and through the members of the C-Suite (i.e., the CEO as the public spokesperson). Working closely with relevant media houses and journalists, placing stories, opinions (so called “bylines”, commenting on a topic as part of a broader article) or full-out articles by a credible journalist on your brand or product are extremely valuable – so long as these are positive.

The Success is in the perfect Mix

Firstly, it is important to articulate and define a clear, overarching content marketing strategy for these tactical levers to be effective. Secondly, monitoring paid, owned, and earned media will give you an understanding of how visibility around your brand is created and where you can influence it. And lastly, that knowledge can then be fed back into your communications approach and help improve your messaging, relevancy towards audiences and amplify your content further.

We regularly share case studies on our work in this space, and of course if you are interested to learn how the principles of mastering owned, earned and paid media can help you boost your visibility, please get in touch.

Show all
Related articles
thinking
5 Tips on how to make your Vision tangible
thinking
Digital PR for SMEs
thinking
Employer Branding: The Key to Winning the War for Talent.
thinking
The impact of individual actions on reputation
1 2 3 … 13 Next »
Subscribe
to our Newsletter